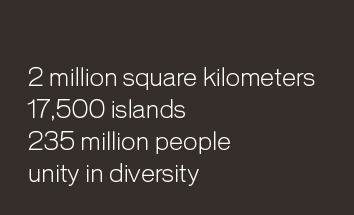 The Republic of Indonesia is the world's largest archipelagic state, with an area of almost 2 million square kilometers, comprising some 17,500 islands, and crossing three time zones. Its population of more than 235 million people makes Indonesia the world's fourth most populous country.

The Indonesian archipelago has been an important trade region since at least the seventh century. Following three and a half centuries of Dutch colonialism, Indonesia secured its independence after World War II.

The history of Indonesian legal system is closely related to the Dutch legal system. During the Dutch colonial rule, the Netherlands-Indies Government implemented the concordantie principle in the legal sector, which meant that almost every law that was passed by the Netherlands parliament was introduced in the Indonesian territory, with minor changes if necessary.

When Indonesia became independent, Article II of the Transitory Provisions in its 1945 Constitution, established that all laws and legislation existing under the Dutch colonial administration automatically became the laws and legislation of the Republic of Indonesia, until repealed, revoked or amended.

Across its many islands, Indonesia consists of distinct ethnic, linguistic, and religious groups, but as a nation has developed a shared identity. Indonesia's national motto, "Bhinneka Tunggal Ika" ("Unity in Diversity"), articulates the diversity that defines the country.