After almost sixty years since its adoption, Indonesia finally ratified the Convention to Abolish the Requirement for Legalisation of Foreign Public Documents (the “Convention”) via Presidential Regulation No. 2 of 2021 (“PR 2/2021”), on 4 January 2021. The ratification sends a positive signal to Indonesia’s legal community in particular amid the Covid-19 pandemic; and to the business sector in general, because it simplifies the legalization of foreign documents, which has always been time-consuming – even under normal circumstances, let alone a pandemic.

A. Legalisation by Apostille

Under the Convention, legalization is a State procedure in which a document is produced to “authenticate” a signature to confirm that it was signed by its actual bearer within their authorized capacity. Each State may have its own legalization procedure. Generally, the procedure may involve a notary, a court or the justice ministry, the ministry of foreign affairs, and the representative office (embassy or consulate) of the destination country.

Indonesian law has a similar definition for legalization. According to Ministry of Foreign Affairs Regulation No. 13 of 2019 on Document Legalisation Procedures at the Ministry of Foreign Affairs (the “MoFA Regulation”), legalization focuses on the authentication of a document and the signature and/or stamps, not the substantive content of a document.

Prior to the ratification of the Convention, legalization generally adopted the following procedure: 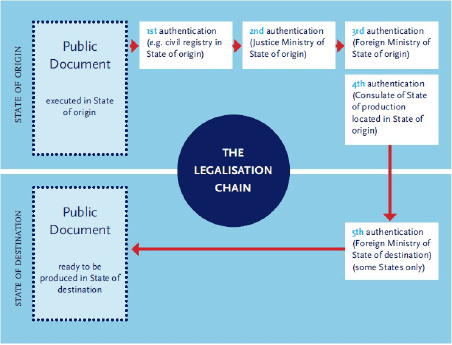 After ratification of the Convention, authentication will have the same effect but be considerably more streamlined: 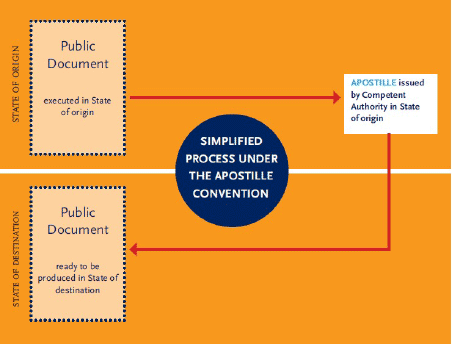 This is particularly beneficial for transactions and actions where speedy authentication is of the essence.

B. Applicability and Exclusions

1. What constitutes a public document

An apostille is applicable to public documents, which under Article 1 of the Convention are:

Within this context, the treatment of a document may also depend on how it is defined in its original jurisdiction, which usually determines whether a document falls into the category of a document that must be apostilled or legalized.

The method of legalization is further dependent on the requirements applicable in each state. The MoFA Regulation requires any Indonesian document to be used abroad, or a foreign document for use in Indonesia, to be legalized by the authorized institution. Therefore, once the Apostille Convention has become effective for Indonesia it would be logical that the apostille will in time replace legalization under the MoFA Regulation for the documents originating from a member state of the Convention.

The Convention does not apply to documents executed by diplomatic or consular agents, or administrative documents dealing directly with commercial or customs operations.

PR 2/2021 also stipulates that documents issued by a prosecutor’s office in Indonesia must still follow the legalization process applicable in Indonesia.

Although already promulgated, PR 2/2021 is still dependent upon the issuance of an implementing regulation, particularly because the Convention requires a contracting state to appoint a Competent Authority as the agency to take responsibility for the apostille process. The implementing regulation should also address the potential ambiguity over the definition of public documents in Indonesia, as well as the extent to which an apostille is applicable, and how Indonesian parties must treat a document that has been apostilled rather than legalized.

While the Government’s attempt to simplify legalization procedures is laudable, an implementation regulation will provide essential guidance for clear and effective implementation of PR 2/2021.

This ABNR News and its contents are intended solely to provide a general overview, for informational purposes, of selected recent developments in Indonesian law. They do not constitute legal advice and should not be relied upon as such. Accordingly, ABNR accepts no liability of any kind in respect of any statement, opinion, view, error, or omission that may be contained in this legal update. In all circumstances, you are strongly advised to consult a licensed Indonesian legal practitioner before taking any action that could adversely affect your rights and obligations under Indonesian law.